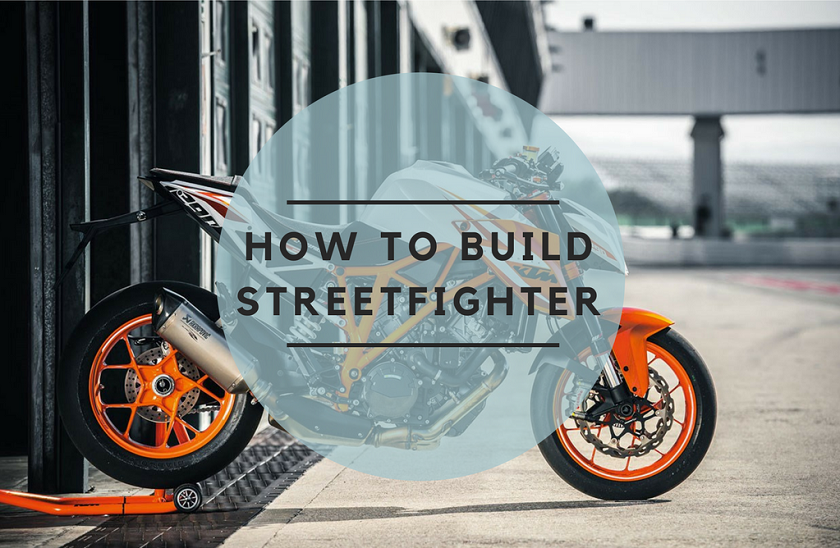 If you are not familiar with the term, a streetfighter is a motorcycle with all of its superfluous bodywork removed. It's a modern day Cafe Racers on steroids. To create a bike that in essence is pared down to its most basic elements.

The donor is predominantly a fully faired supersport bike, as it was the removal of the fairing and addition of motocross handlebars that originally gave rise to the genre.

But it is not limited to this; it is possible to give the streetfighter treatment to any bike from a Goldwing to a big adventure bike. But this article will go through the build process of converting a sports bike.

The origins of the streetfighter are shrouded in the mists of burnt tire smoke, with a myriad of opinions on where and when it emerged. So, let me clarify it for you, the first streetfighters were built in England. 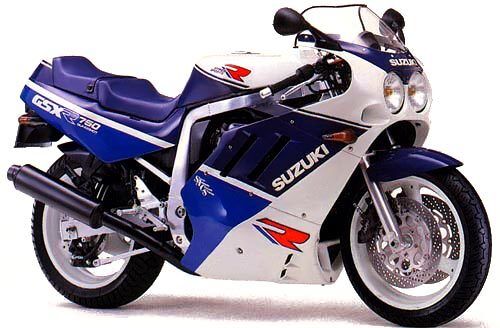 During the late 1980’s all Japanese manufacturers were bombarding the market with the first generation of superbikes. This was the era of the Suzuki GSXR, Yamaha FZR, Honda CBR and Kawasaki GPX, every one of these bikes, capable of well over 150 mph.

Insurance cover was high, but when people started bouncing them down the road and the cost of a new set of factory plastics was factored in. The cost to insure a bike rocketed.

The perfect storm that created the first streetfighter was starting to build. In Great Britain, you can opt for cheap ass insurance that covers you legally, but is useless if you need to make a claim. 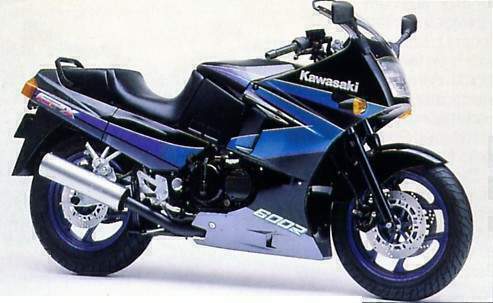 And there we have it, the first guy to throw his Gixer down the road, was unable to make a claim, but still needed to get to work on Monday morning. So he dumped the fairing, drilled out the triple clamp to take risers and bolted on some drag bars. And there it is, the birth of a whole new genre. But just like that little guy born in a stable with only animals watching, there was no fanfare.

So, that takes care of the origins, and as for popularity, just take a look at motorcycle manufacturers jumping on the bandwagon. There’s the Aprilia Tuono, Suzuki B King, KTM Super Duke, MV Brutale, Triumph Street Triple, and Ducati going all the way by actually calling one of their models, the Streetfighter. - Common Motorcycle Accident and how to avoid them

Necessity being the mother of invention, the first streetfighters were built out of need. But such was the popularity of the style that soon, people were tearing down their pristine race reps to replicate the look.

Motorcycle manufacturers spend hundreds and thousand of dollars of R and D time perfecting wind-cheating fairings to hide behind at 170 mph. So what is it that makes someone want to sit bolt upright and get blown about like a sail, when there are perfectly good naked bikes to do that on?

It all comes down to individuality and the same sticking a finger up to the norm, mentality that started with bobbers and chops. Buy a race rep or a retro and one day someone will pull up right next to you on exactly the same thing.

There’s also a certain irony to be enjoyed from dumping the fairing and clip-ons, which you either get or you don’t. Be prepared though, for what lurks beneath. 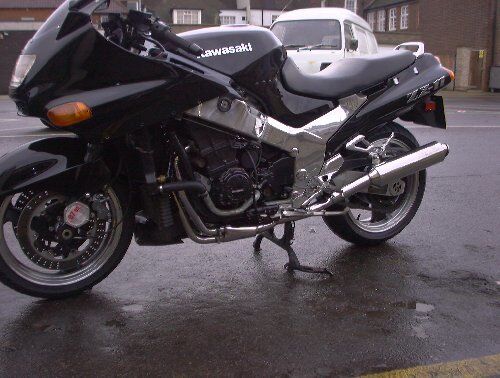 Which brings me nicely to, what makes a good donor bike? Well, there’s a very generalized rule of thumb here, which says, the earlier the race rep the easier it is to convert.

This is simply because just as technology has advanced so has the need to hide more and more stuff behind the fairing. But also, because some bikes just lend themselves to making better streetfighters than others.

For example, in all the bikes I have taken down this path, two spring to mind that exemplifies this perfectly. The first was a highly collectible Triumph Super III, a factory limited edition with a tuned Cosworth engine.

It was immaculate, kept in the previous owner's front room and I had to promise to keep it untouched and immaculate. I had it exactly 1 week before the fairing came off.

With just a few fairing mounts to remove, horn to relocate and the usual tangle of wiring to sort, the job was relatively simple. The same cannot be said for the second of my examples, a Kawasaki ZZR 1100.

On removing the lower panels I was faced with 15 years of accumulated debris, road kill and rotting aluminum, which can all be sorted with a wire brush and some engine paint. But when I removed the upper panels the full horror story revealed itself.

The right side, with all of its coolant hoses, thermostats and reservoirs looked like the handiwork of a psychotic plumber. The left side was slightly better with only the air intake and some cabling to sort.

But the yawning 3’’ perimeter gap between the frame and gas tank was ugly beyond words. Not to mention the nest of mating snakes that fed the clocks and ancillary fairing mounted dials.

Don’t ever be put off though; panels can be fabricated to close gaps, and you can buy different color radiator hoses or even spray your own. And as for the likes of overflow tanks, throw them in the bin and replace them with things like aluminum water bottles, or whatever innovative idea comes to mind. Just make sure it's not part of a pressurized coolant system.

This is exactly what I meant in saying some bikes make better fighters than others. Go through that same process with a GSXR 750/1100 and you’re rewarded in spades.

The gas tank follows the lines of the frame so snuggly you couldn’t push Donald Trumps titanium Amex card between them. And the engine is a design classic in its own right.

But these are merely the joys of the build and if it was easy everyone would be doing it. So, let's go through the basic build problems, or should that be challenge. With the fairing off, it's time to take a step back and look at the direction you want to take and more importantly the budget you have to play with.

Go With the Flow

Regardless of what bike I’m customizing I generally have a sketch or Photoshop rendition of how I want it to look, but with a streetfighter, I prefer the organic route. That means, take the crap off, see what you’ve got to work with and go with the flow.

The first thing to tackle is the front end, and it is here that you make your first decision. Either ditch the whole lot and start from scratch or work with what you have. Once again this will depend entirely on the model and depth of detail you want to achieve. 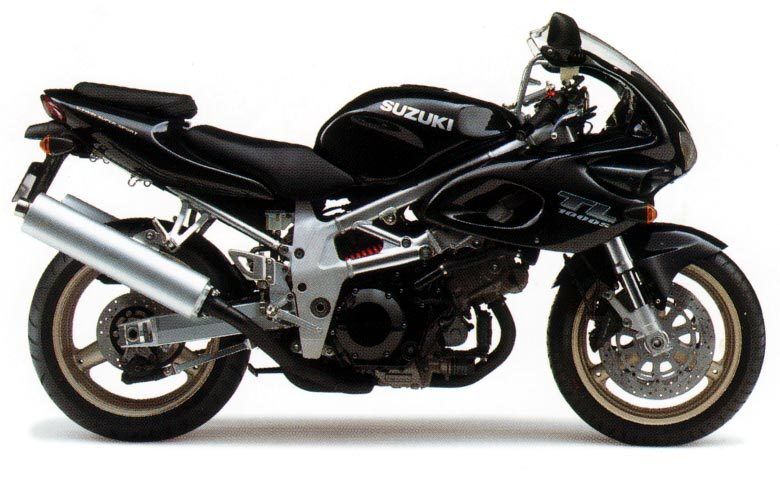 As an example, on bikes like the Suzuki TL1000S, the clocks are fixed to the back of the twin headlights which in turn are bolted to the steering head via a short box section tube.

This gives the bike a stretched-out look, which you either love or hate. I personally like it, so in that case, I’d fabricate a surround for the clocks and a fly screen for the headlight. Then relocate the indicators and trim any unwanted wires off the harness.

If you prefer to go for a clean look, you’ll need headlights, headlight brackets, and either a single speedo, or digital multifunction clock assembly. When looking online for these items, add the term ‘custom’ to your search.

This will throw in more options over and above the usual streetfighter specific components. Many parts marketed specifically for chops and bobbers for example can look great on a fighter.

Next come the bars, and once again, its decision time. There are several manufacturers making triple clamp conversions for race reps. These go from just a pre-drilled clamp, to a full kit that includes longer length brake and clutch cables as well as handlebar clamps.

The alternative is to get your own clamp drilled out to take risers. If the risers are cast into the triple clamp get them milled and drilled out. The height of your handlebars will also be determined by how much slack there is in the switchgear wiring and the length of the throttle cable.

But if you take the tank off you can generally re-route them to give an extra couple of inches or so. Just check that when everything is bolted in place there’s enough slack to turn the bars lock to lock.

You can of course buy a custom length throttle cable and also extend the wiring, which although time-consuming, is totally doable. Just make the extensions close to where they branch out of the main harness so they can be hidden under the tank.

The seat is the next big item on the list and here you’re only limited by your imagination. Keep the seat and side panels and add a seat hump. Or chop everything off just before the pillion and make it a single seater.

Invariably, race reps have a bolted-on triangulated sub-frame. This makes it very easy to adapt and such is the size of the market, there is a host of companies making seat units going from the stylish to the outlandish. You can even get down to your local bike breakers and look for tail sections from other makes and models. 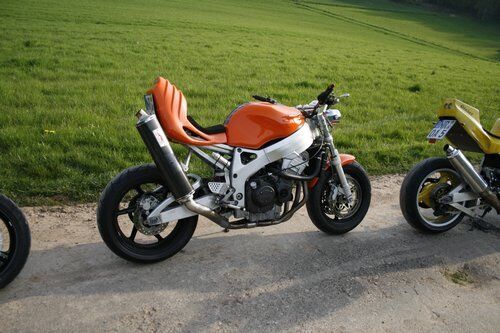 There isn’t a wrong way to do it but as they say, beauty is in the eye of the beholder. So, if you want to see how different countries have put their own spin on things, just Google image, German streetfighters.

By now, you’ll have the basic elements of your build together, but the devil is in the detail. So the myriad of final touches such as tail lights, indicators, exhaust, paint etc. is entirely up to you.

This article has dealt with the absolute basics of what to expect when converting your existing race rep into a fighter. For some, building a streetfighter means stripping their bike down to the last nut and bolt to create a gleaming work of art. Whilst others, prefer the ironic humor of a cut-down creation in matt black. 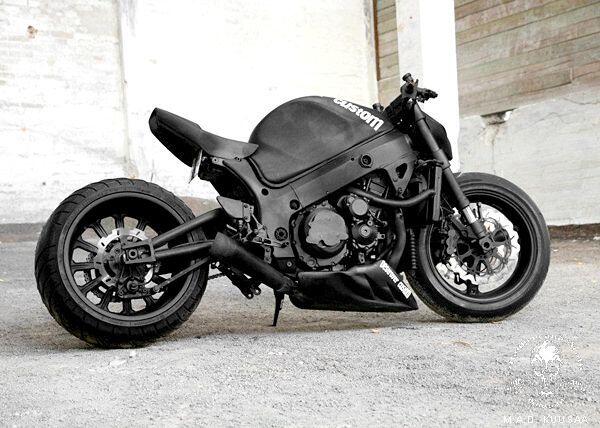 The key to this type of build in particular though is research. If you want to streetfighter your own bike, spend some time on Google images looking at finished examples for inspiration or more importantly, potential problem areas.

Don’t be afraid to extend your search criteria either, just out of interest I entered ‘Honda Fireblade with Kawasaki seat unit,’ and got bombarded with images. And if there are none, build it anyway and post your own photos, to be a reference point for those who come after.

You could even join an SF forum, if you’ve got specific questions or technical queries. People who have been bitten deep by the streetfighter bug tend to have an encyclopedic memory of what bits will fit which bikes.

Altering any stock motorcycle can be a challenge and although they may look comparatively easy to build, streetfighters bring with them, their own range of challenges. In return though, they also offer very distinctive rewards. But if you’re put off, don’t worry; there’s a perfectly nice retro naked with your name on it, at dealers near you.

​In the End, when you drive your bike don't forget to were safety equipmentd specially your helmets and Gloves. Safety come first in everything in life. Enjoy your ride!!